Auto Week October 12, 1981 had an article titled "Living the life of Riley"... David Bowles also sent me an article titled The Technician that was published in Car and driver (prior to July 1997)
I see that this discussion was going on several years ago. I have discovered some additional information on the cars that were designed by Bob Riley. Outside of Bob Riley there are a few key players and 2 basic designs, The first cars which were designed by Bob in 1977. I have any article from Autoweek from 1981 that talks a little about that first design.

Denny Moothart built some real history with that first designed car. It was most recently on EBAY in France in June of this year (2010) . It should be noted that I owned that car in the late 90's before I sold it to Jim Vawter in California. It was originally regristered as a MRA-Riley. It has been listed on many occasions as the "First Ground Effects Super Vee Designed and Built in the United States".

The reaserch I have shows this car running its first race at Watkins Glen in 1978. However there is another Super Vee from this Bob Riley design. It was owned by Jim Griffith. It was driven by Roger Bighouse also in 1978. It was registered as a Riley-Griffith in the SCCA records and as a Riley in the USAC records. This car's first race was at St. Jovite the race before Watkins Glen in 1978.

I purchased this car at the same time I purchased the MRA-Riley from Robbie Glover of Omaha NB in the mid 90's. I spoke to Jim Griffith about a year and a half ago and according to Jim I indeed may have this car. So at this point I believe that there were only 2 cars in the first design.

The Second design was the PR-2 designed in 1979. David Boles owned the imfamous Gary Pratt car which he ultimately donated to a technical collage. I believe that there were possibly as many as 8 of the PR-2's but I don't know for sure. Is there anyone out there that know's anything more about either of these designs? Or information about when other manufactures fitted their cars with "Ground Effects Tunnels"? 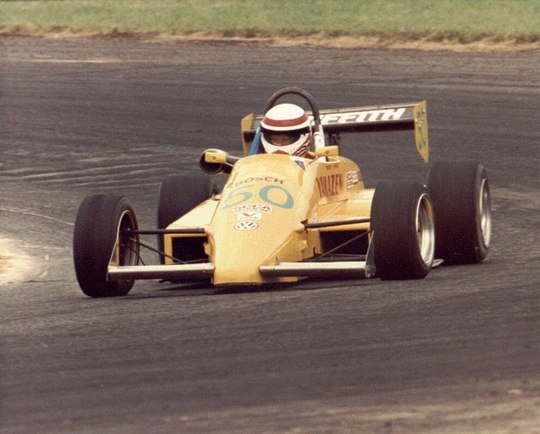 Timothy E. Bennett driving a Griffith Racing Formula Super Vee
Driven by Timothy E. Bennett of the Cleveland, Ohio area in this 1989 photo, this is one of the Griffith Racing Super Vee cars that was present at the Nazareth race mentioned above (though this photograph was taken at a different racing facility, possibly Nelson Ledges in Ohio).  This represents the final of several model versions of Super Vee race car designed and built by Jim Griffith in Twinsburg, Ohio.

Of particular note: Bosch Super Vee being a series in which cars built by British manufacturer Ralt became predominant, Griffith Racing Cars was among a very few US constructors of Super Vee machines -- and to this writer's knowledge the last American builder to field a newly designed car before the series' demise. https://sites.google.com/site/danhirschfeld2/celbritygocart