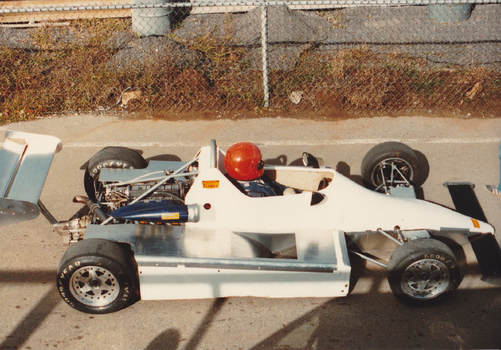 Percy had been metal working ever since the early 1970's he bought a Triumph TR3 that "shockingly" needed vast amounts of metal work. He read some books on the subject, bought an oxyacetylene welding setup,and discovered he had a real passion for this kind of work.

Then ...
Percy needed to race cars to quench an inner hunger. In 1978 he bought a Lola Formula Ford to start motor racing. He brought all the metal skills picked up on the Triumph and gained new ones in keeping the Lola running. He had been modifying the Lola to such an extent that he began building his own Formula Ford race car.I n 1981 this car did it's first race at Mosport and he finished second.

He won his fifth race in this car at Nelson Ledges in Ohio.

By then his confidence as a builder was up and he decided to build a Super Vee,which was a pro class for 200 hp VW water cooled engines. It was an exciting class but he was never able to enter any big races as finances were an issue.
"Okay, maybe he was aiming too high but many lessons were learned."
Last update: 2 June 2018: btm